Adolescent Osteochondritis Dissecans of the Elbow 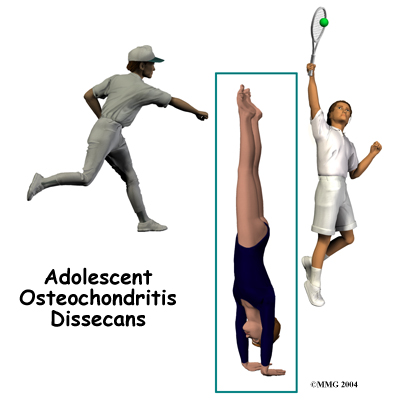 Young gymnasts and overhand athletes, particularly baseball pitchers and racket-sport players, are prone to an odd and troubling elbow condition. The forceful and repeated actions of these sports can strain the immature surface of the outer part of the elbow joint. The bone under the joint surface weakens and becomes injured, which damages the blood vessels going to the bone. Without blood flow, the small section of bone dies. The injured bone cracks and may actually break off. This condition is called osteochondritis dissecans (OCD).

In the past, this condition was called “Little Leaguer’s elbow”. It got its name because it was so common in baseball pitchers between the ages of 12 and 20. Now it is known that other sports, primarily gymnastics and racket sports, put similar forces on the elbow. These sports can also lead to elbow OCD in adolescent athletes.

What part of the elbow does this problem affect?

The elbow is the connection of the upper arm bone (the humerus) and the two bones of the forearm (the ulna and the radius). The radius runs from the outer edge of the elbow down the forearm to the thumb-side of the wrist. 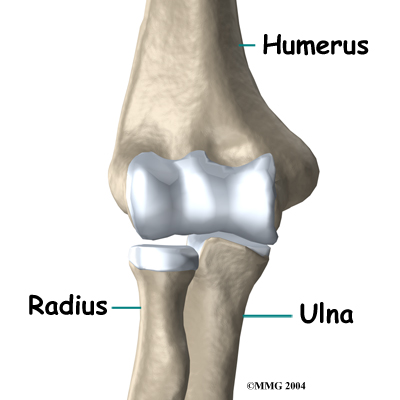 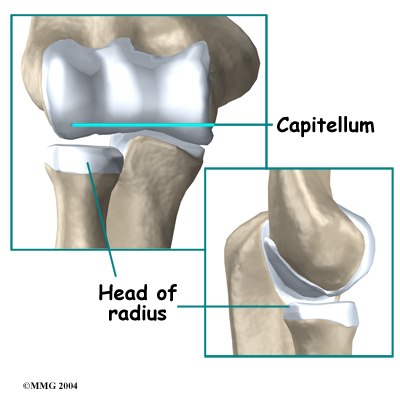 When the head of the radius spins on the capitellum, the forearm rotates so that the palm faces up toward the ceiling (supination) or down toward the floor (pronation). The joint also hinges as the elbow bends and straightens. 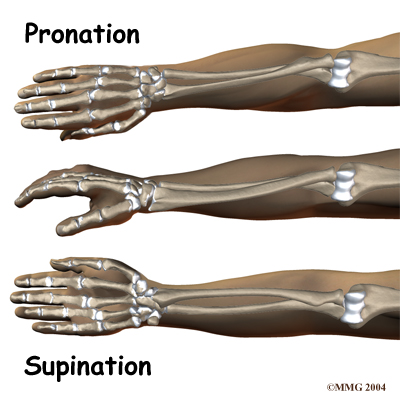 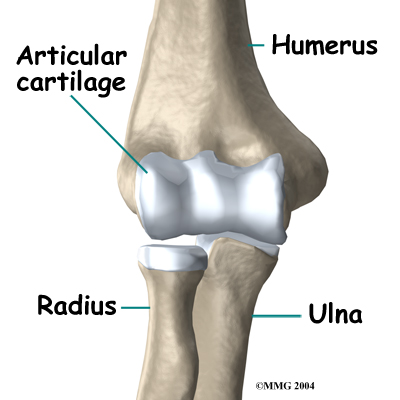 Elbow OCD affects the articular cartilage in the capitellum. It also affects the layer of bone just below the cartilage, which is called the subchondral bone. In advanced stages of OCD, the upper end of the radius, particularly the head of the radius, is also involved.

How does this problem develop?

The cause of elbow OCD in adolescents is unknown. Scientists think that genetics is one possibility. This means that certain families are more likely to develop OCD. The condition often occurs among relatives, and it is sometimes seen in several generations of the same family. 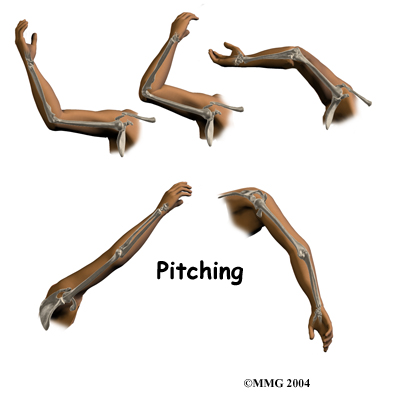 Although the exact cause of elbow OCD in adolescents is not known, most experts agree that overuse of the elbow plays a major role in its development.

Pitching can lead to overuse strain and, in turn, elbow OCD. Throwing puts a lot of force on the elbow joint. When the throwing action is repeated over and over again, it can damage the immature joint surface of an adolescent's elbow. After winding up and cocking the arm back, the pitcher must quickly accelerate the arm to gain ball speed. Then, almost immediately, the pitcher has to slow the arm down and follow through. The pitcher may angle the elbow outward slightly during the acceleration phase to get more ball speed. This action jams the head of the radius against the capitellum. During the slowing and follow-through after a pitch, the forearm is fully pronated. This action puts extra pressure on the humeroradial joint.


Hitting a ball with a racket can strain the elbow just like pitching a baseball. The player may angle the racket and elbow out slightly to gain ball speed. Hitting the ball with the arm and racket in this position jams the radial head against the capitellum, similar to what can happen during pitching motions. Gymnasts are also at risk for high forces on the capitellum when they repeatedly do maneuvers on their hands with their elbows locked out straight.

These actions done over and over again can eventually cause an overuse injury to the humeroradial joint of adolescent athletes. Adolescents' articular cartilage is newly formed and so can't handle these types of forces. The subchondral bone (under the articular cartilage) in the capitellum takes the brunt of the stress. A portion of the bone may eventually weaken, and possibly even crack. When the bone is damaged, the tiny blood supply going to the area is somehow blocked. Without blood supply, the small area of bone dies. This type of cell death is called avascular necrosis. ( Avascular means without blood, and necrosis means death.) 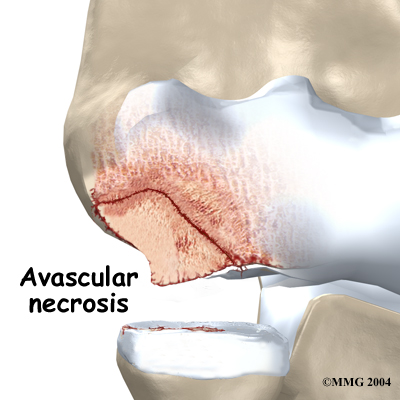 The crack may begin to separate. Eventually, the small piece of dead bone may break loose. This produces a separation between the articular cartilage and the subchondral bone, which is the condition called OCD. If the dead piece of bone comes completely detached, it becomes a loose body. The loose body is free to float around inside the joint.

Elbow OCD in adolescents is different. It occurs after growth in the capitellum has stopped, which is usually between the ages of 12 and 15. Elbow OCD in adolescents affects only a portion of the capitellum, generally along the inside and lower edges of the bony knob. Unless elbow OCD is diagnosed and treated early, the results are not as good as the results for Panner's disease. The adolescent with elbow OCD sometimes ends up with elbow arthritis by early adulthood.

Only about 20 percent of kids with elbow OCD remember hurting their elbow. The remainder usually develop symptoms over time, which is typical with overuse problems.

In the absence of a specific injury, the athlete may at first feel bothersome elbow discomfort only while playing sports. The soreness generally goes away quickly when the elbow is rested. Over time, however, the elbow pain worsens, is hard to pinpoint, and may linger after using the arm. The elbow feel may feel stiff, and it may not completely straighten out.

In advanced cases of elbow OCD, the patient may notice that the joint grinds (called crepitus). The elbow may catch, or even lock up occasionally. These sensations may mean that a loose body is floating around inside the elbow joint. The joint may also feel warm and swollen, and the muscles around the elbow may appear to have shrunk (atrophied). 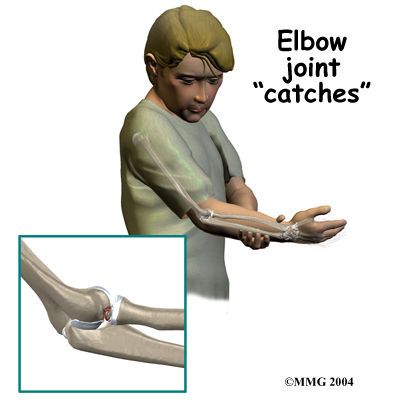 Bad cases of elbow OCD, and those that are not caught and treated early, tend to create bigger problems later in life. The joint may become arthritic early in adulthood. As a result, the patient may always have greater difficulty using the problem elbow.

How do doctors identify the problem?

X-rays are needed to confirm the diagnosis. A front and a side view of the elbow are generally the most helpful. Early in the course of the problem, the X-rays may appear normal.

As the condition worsens, the X-ray image may show changes in the capitellum. The normal shape of the bony knob may appear irregular. In bad cases of elbow OCD, the capitellum might even look like it has flattened out, suggesting that the bone has collapsed. The X-ray could show a crack in the capitellum or even a loose body. In the late stages of elbow OCD, the radial head may appear enlarged, and the humeroradial joint not be aligned as it normally should. These findings suggest early arthritis.

A magnetic resonance imaging (MRI) scan may show more detail. The MRI can give an idea of the size of the affected area. It can show bone irregularities and also help detect swelling. Doctors may repeat the MRI test at various times to see if the area is healing.

The doctor might order a computed tomography (CT) scan. The CT scan helps confirm the diagnosis. A CT scan clearly shows bone tissue. The doctor can compare CT scans over a period of time to monitor changes in the bones of the elbow.

Once you’ve been diagnosed with elbow OCD, you may need to stop your usual sport activities. This gives the elbow a rest so that healing can begin. Your doctor may prescribe anti-inflammatory medicine to help reduce pain and swelling.

At Purposed Physical Therapy, our goal is to calm pain and inflammation and to protect the elbow from further harm. We might use ice, heat, or ultrasound to control inflammation and pain. As symptoms ease, we will work with you to improve flexibility, strength, and muscle balance in the elbow.

When your elbow starts to feel better, we will give you exercises to get it moving. At first, your therapist will move your arm through passive therapy exercises. Later, we will guide you through active motion exercises, in which your muscles help do the work of moving the arm. As elbow motion and strength improve, we will introduce more advanced strengthening exercises.

Our Physical Therapists will also work with you to help you improve your form in ways that reduce strain on your elbow during sports. Pitchers and racket-sport players might benefit from keeping the elbow aligned correctly, instead of angled outward, during the acceleration phase of the pitch or swing.

If your symptoms are especially bad, you may need to make changes that require less overhand activity. For example, pitchers could shift to playing first base. Gymnasts could focus on maneuvers that don't stress the sore elbow. However, if the detached piece of bone is loose but still attached, all sports activities must be stopped. Sports can begin again when you have no pain and show full elbow movement.

If your case is severe, you may need to wear a sling or a long-arm splint for several weeks before starting elbow motion exercises. As symptoms ease and elbow movement improves, we will begin a guided program of strengthening and sport training.

When you are ready to resume sports activities, we will show you how to protect your injured elbow by applying ice. Ice treatments are simple to do: Place a wet towel on the elbow, then lay an ice pack or bag of ice over the elbow for 10 to 15 minutes. Ice treatments should be used after every sports activity.

What can you expect during rehabilitation?

If you require surgery, your doctor may have you wait a few weeks before starting Physical Therapy. During your first few Physical Therapy treatments, our goal will be to control the pain and swelling from the surgery.

After you’ve recovered from surgery, we will guide you through exercises that help improve elbow motion and to get your muscles toned and active again. At first, we will exercise your elbow in positions and movements that don't strain the healing cartilage. As your program evolves, we will introduce more challenging exercises that safely advance the elbow's strength and function.

Most patients with elbow OCD will need to modify their activities after surgery. Most pitchers are unable to throw hard and without pain afterward. In general, most athletes with elbow OCD need to stop playing high-level sports due to lingering elbow pain and reduced elbow motion.

If symptoms return, you will need to modify your activities until symptoms subside. You'll need to avoid heavy sports activity until symptoms go away and you’re able to safely begin exercising your elbow again.