Physical Therapy in Greenville for Shoulder 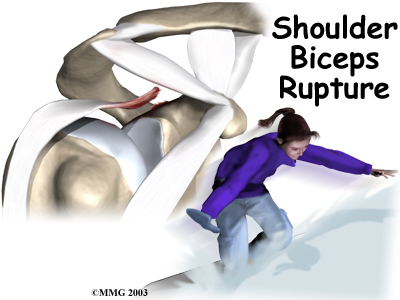 A biceps rupture involves a complete tear of the main tendon that attaches the top of the biceps muscle to the shoulder. It happens most often in middle-aged people and is usually due to years of wear and tear on the shoulder. A torn biceps in younger athletes sometimes occurs during weightlifting or from actions that cause a sudden load on the arm, such as hard fall with the arm outstretched.

This article will help you understand:

What parts of the shoulder are affected? 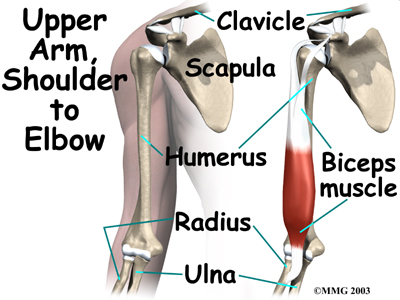 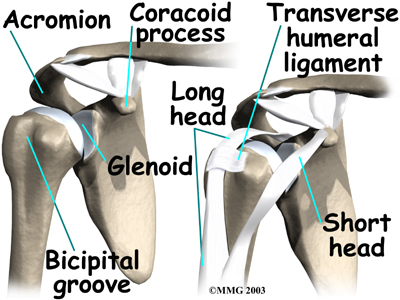 The lower biceps tendon is called the distal biceps tendon. The word distal means the tendon is further down the arm. The lower part of the biceps muscle connects to the elbow by this tendon. 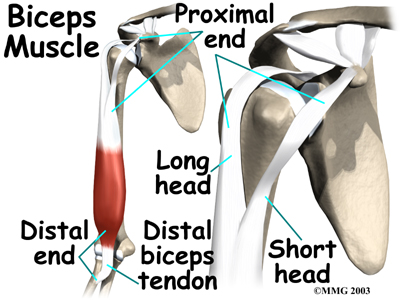 The muscles forming the short and long heads of the biceps stay separate until just above the elbow where they unite and connect to the distal biceps tendon.

Tendons are made up of strands of a material called collagen. The collagen strands are lined up in bundles next to each other. 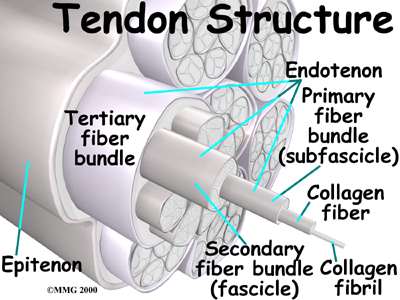 Because the collagen strands in tendons are lined up, tendons have high tensile strength. This means they can withstand high forces that pull on both ends of the tendon. When muscles work, they pull on one end of the tendon. The other end of the tendon pulls on the bone, causing the bone to move.

Contracting the biceps muscle can bend the elbow upward. The biceps can also help flex the shoulder, lifting the arm up, a movement called flexion. And the muscle can rotate, or twist, the forearm in a way that points the palm of the hand up. This movement is called supination, which positions the hand as if you were holding a tray. 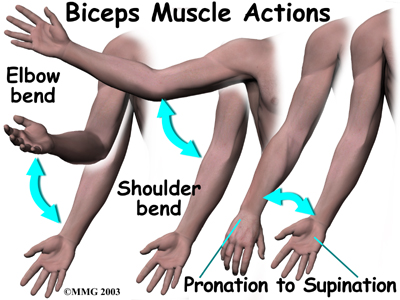 Why did my biceps rupture? 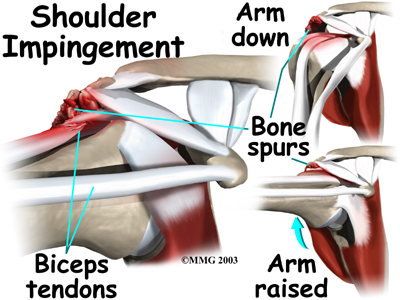 Biceps ruptures generally occur in people who are between 40 and 60 years old. People in this age group who've had shoulder problems for a long time are at most risk. Often the biceps ruptures after a long history of shoulder pain from tendonitis (inflammation of hte tendon) or problems with shoulder impingement. Shoulder impingement is a condition where the soft tissues between the ball of the upper arm and the top of the shoulder blade (acromion) get squeezed with arm motion.

Years of shoulder wear and tear begin to fray the biceps tendon. Eventually, the long head of the biceps weakens and becomes prone to tears or ruptures. Examination of the tissues within most torn or ruptured biceps tendons commonly shows signs of degeneration. Degeneration in a tendon causes a loss of the normal arrangement of the collagen fibers that join together to form the tendon. Some of the individual strands of the tendon become jumbled due to the degeneration, other fibers break, and the tendon loses strength.

A rupture of the biceps tendon can happen from a seemingly minor injury. When it happens for no apparent reason, the rupture is called nontraumatic.

Patients often recall hearing and feeling a snap in the top of the shoulder. Immediate and sharp pain follow. The pain often subsides quickly with a complete rupture because tension is immediately taken off the pain sensors in the tendon. Soon afterward, bruising may develop in the middle of the upper arm and spread down to the elbow. The biceps may appear to have balled up, especially in younger patients who've had a traumatic biceps rupture. The arm may feel weak at first with attempts to bend the elbow or lift the shoulder. 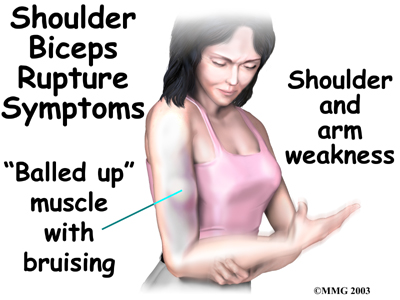 The biceps tendon sometimes only tears part of the way. If so, a pop may not be felt or heard. Instead, the front of the shoulder may simply be painful, and the arm may feel weak with the same arm movements that are affected with a complete biceps rupture.

The physical exam is often most helpful in diagnosing a rupture of the biceps tendon. Our Physical Therapistmay position your arm to see which movements are painful or weak. By feeling the area of the muscle and tendon, we can often tell if the tendon has ruptured. The muscle may look and feel balled up in the middle of the arm, and a dent can sometimes be felt near the top of the shoulder.

Some patients may be referred to a doctor for further diagnosis. Once your diagnostic examination is complete, the Physical Therapists at Purposed Physical Therapy have treatment options that will help speed your recovery, so that you can more quickly return to your active lifestyle.

It is usually preferable to treat a ruptured long head of biceps tendon without surgery. This is especially true for older individuals who can tolerate loss of arm strength or if the injury occurs in the nondominant arm. 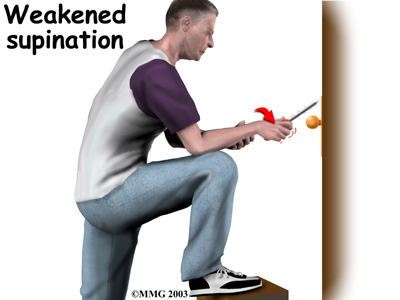 Not having surgery usually only results in a moderate loss of strength. The short head of the biceps is still attached and continues to supply strength to raise the arm up. Flexion of the elbow may be affected, but supination (the motion of twisting the forearm such as when you use a screwdriver) is usually affected more. Not repairing a ruptured biceps reduces supination strength by about 20 percent.

Nonsurgical measures could include a sling to rest the shoulder. Patients may be given anti-inflammatory medicine to help ease pain and swelling and to help return people to activity sooner after a biceps tendon rupture. These medications include common over-the-counter drugs such as ibuprofen.

When you begin your Purposed Physical Therapy rehabilitation program, our Physical Therapist will give you tips on how to rest your shoulder and how to do your activities without putting extra strain on the sore area.

Our Physical Therapist may apply ice and electrical stimulation to ease pain. We can then use exercises to gradually strengthen other muscles that help do the work of a normal biceps muscle.

In cases where the ruptured biceps tendon is treated nonsurgically, you will need to avoid heavy arm activity for about three to four weeks. As the pain and swelling resolve, you should be safe to begin doing more normal activities.

If the tendon is only partially torn, however, recovery takes longer. Patients usually need to rest the shoulder using a protective sling. As symptoms ease, your Physical Therapist at Purposed Physical Therapy can start you on a carefully progressed rehabilitation program.

Immediately after surgery, you'll need to wear your shoulder sling for about four weeks. When you begin your Purposed Physical Therapy post-surgical rehabilitation, your first few Physical Therapy sessions may involve ice and electrical stimulation treatments to help control pain and swelling from the surgery. Our Physical Therapist may also use massage and other types of hands-on treatments to ease muscle spasm and pain.

We will gradually have you begin exercises to improve movement in the forearm, elbow, and shoulder. You need to be careful to avoid doing too much, too quickly.

Heavier exercises for the biceps muscle are avoided until at least four to six weeks after surgery. Our Physical Therapist may have you begin with light isometric strengthening exercises. These exercises work the biceps muscle without straining the healing tendon.

At about six weeks, you will start doing more active strengthening. As you progress, our Physical Therapist will teach you exercises to strengthen and stabilize the muscles and joints of the elbow and shoulder. Other exercises will work your arm in ways that are similar to your work tasks and sport activities. Our Physical Therapist will help you find ways to do your tasks that don't put too much stress on your shoulder.

Although the time required for recovery varies, as a guideline, you may require Physical Therapy for six to eight weeks. It generally takes three to four months, however, to safely begin doing forceful biceps activity after surgery. Before your Physical Therapy sessions end, our Physical Therapist will teach you a number of ways to avoid future problems.

Your doctor may order X-rays. X-rays show the bones that form the shoulder joint and may show bony changes that have contributed to a ruptured biceps. For example, bone spurs (small projections of bone) may be seen on the X-ray. Spurs that form near the biceps tendon will often puncture the tendon as the arm is used with activity. X-rays can also show if there are other problems, such as a fracture. Plain X-rays do not show soft tissues like tendons and will not show a biceps rupture.

Your doctor may also order a magnetic resonance imaging (MRI) scan. This is the most reliable way to check whether the biceps tendon is only partially torn or if the tendon actually ruptured. An MRI is a special imaging test that uses magnetic waves to create pictures of the shoulder in slices. The MRI can also show if there are other problems in the shoulder.

Surgery is reserved for patients who need arm strength, are concerned with cosmetics of the balled up biceps, or who have pain that won't go away. 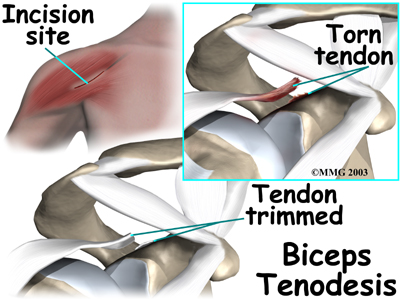 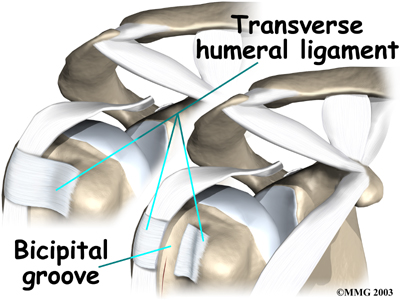 A burr is used to form a keyhole-shaped cavity within the bicipital groove. The top of the cavity is round. The bottom is the slot of the keyhole. It is made the same width as the biceps tendon. 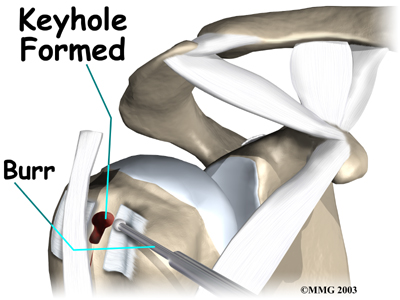 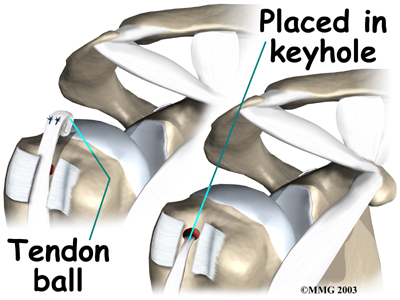 The surgeon tests the stability of the attachment by bending and straightening the elbow. When the surgeon is satisfied with the repair, the skin incisions are closed, and the shoulder is placed in a protective sling. 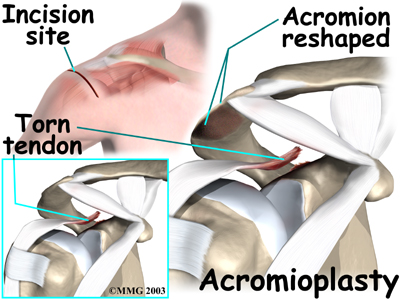 This procedure may be used for younger patients who've had a recent traumatic biceps rupture, have problems with impingement, and who have an injured rotator cuff.

Acromioplasty involves cutting and reshaping the acromion, the bone that forms the top part of the shoulder. Some surgeons will also sever the corocohumeral ligament, which arches over the top of the shoulder joint. These steps relieve pressure on the tissues between the ball of the humerus and the acromion, including the biceps and rotator cuff tendons. For this reason, this procedure is sometimes called subacromial decompression. The ruptured end of the biceps is then anchored to the upper end of the humerus. This is called direct tenodesis.

The surgeon begins by making an incision across the top of the shoulder. The shoulder muscles are separated to expose the top of the humerus. Bone spurs are removed, along with part of the acromion. The surgeon then smooths the rough ends of the bone.

After the acromioplasty procedure, the surgeon focuses on the biceps tendon. When the bicipital groove is in view, the transverse humeral ligament is cut. Next, an osteotome is used to open the joint capsule and create a trough next to the bicipital groove. Three small holes are drilled along each side of the trough. The surgeon places the loose end of the biceps tendon in the new groove. 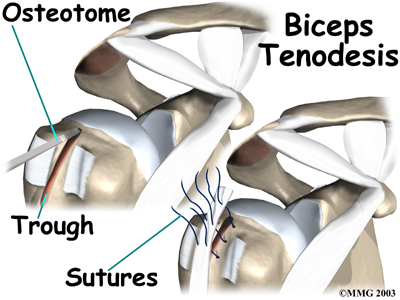 Sutures are woven into one drill hole, through the tendon, and out the opposite drill hole. This is repeated for the remaining two sets of drill holes. Next, the top end of the ruptured tendon is cut off. Finally, the three sutures are firmly secured.

When the surgeon is satisfied with the repair, the transverse humeral ligament and joint capsule are sutured, followed by the skin incision. The arm is bent at the elbow and placed in a light splint that is to be worn for four weeks after surgery.